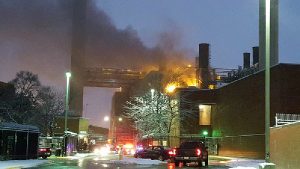 On March 4, 2016, at approximately 5:30 a.m., a two-alarm fire broke out at the Detroit Wastewater Treatment Plant (WWTP) located on West Jefferson Avenue along the Rouge River in southwest Detroit. The cause of the fire, which started on the fourth floor of Complex II Incineration, was friction created from the large diagonal moving Conveyor Belt H. The belt was rubbing up against semi-solid dewatered sludge that had become wedged throughout the metal frame. Friction heat caused the sludge to ignite while employees were conducting cleanup one floor above.

Major rehabilitation had been deferred over the years in anticipation of an alternative biosolids disposal solution to handle all the solids so the fire moved the project up in priority on the Capital Expenditures list. Great Lakes Water Authority (GLWA) issued a request for bids for modifications and rehabilitation of the facility. Contract GLWA-CON-197 “Modifications to Incinerator Sludge Feed Systems in Complex II at the WRRF” was awarded to Weiss Construction.

Weiss then awarded the electrical contracting to Rotor Electric. Rotor has performed substantial work in GLWA (formerly known as Detroit Water and Sewerage Department – DWSD) facilities over the years. The overall goal of this project is to provide improved sludge conveyance from each dewatering facility along with better operations and maintenance functions.

GLWA WRRF has multiple hearth incinerators (MHI) in Complex II (C-II) Incineration. This incineration facility is used to dry and combust dewatered sludge by thermal conversion into exhaust gas and inert ash. The C-II Incineration complex is over 40 years old and has many major pieces of equipment that were nearing the end of their useful life. This equipment requires replacement or major rehabilitation in order to be used as the primary solids disposal method.

The Motor Control Centers (MCCs) at electrical buildings EB 24, EB 25 and EB 26 are over 40 years old and have reached their maximum life service expectancy. Each MCC services critical loads at C-II Incineration, so the need for replacement is critical. The EB-26 Unit Substation at Incinerator C-II is also more than 40 years old and has reached the end of its useful service life, requiring rehabilitation to ensure continuous reliable operation.

Rotor Electric is completing three packages of electrical work at C-II. Package A includes replacement of conveyors in Sludge Dewatering Complex II and Incineration Complex II at the WRRF. A complete new operational Unit Substation in the 6th Floor Electrical Room (EB-26) including demolition and installation is the focus of Package B.  For Package C, we are replacing a total of nine Motor Control Centers in the complex’s electrical buildings.

The almost $5 million contract provides for approximately 2-1/2 years to complete the project. June 2020 has been established as the completion date as we work diligently to complete the upgrades and replacements to ensure that the GLWA facility continues to operate efficiently for many more years.