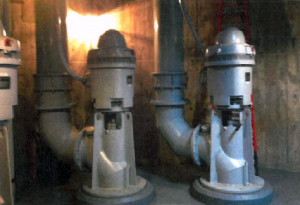 They are the structures that thousands of drivers pass every day but probably never notice. These are highway storm water pump stations or pump houses. Pumps inside these stations remove storm water from highway sections that cannot be drained by gravity.

In metro Detroit there are 139 such pump stations that that remove water from low-lying highways in Macomb, Oakland, and Wayne counties during heavy rains. 119 of those are in Wayne County alone. The pumps move water from the highway into the pump house and then into the local drainage system. The pumps are powered by electricity and electronics. They cycle on and off during storms to keep the water moving.

If there is a mechanical failure, however, water backs up on the highways and motorists can encounter dangerous deep standing water. The pumps are also affected by temperature so if there is a spike, they shut off for safety reasons. During heavy rains, storm water can even back up into the pump station and the pumps will shut off to prevent problems with the electrical systems and electronics. Another problem is road debris that can clog the pump pipes. Understandably, the maintenance of these pumps is critical.

The underground pump station typically has three levels. These are reach by a careful climb backward down a steep set of stairs. The uppermost level is occupied by the large metal pipes that the storm 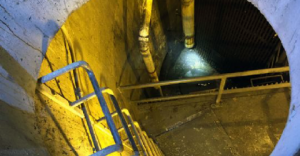 water flows through on its way to the local drainage system. Also visible are the very tops pf the large pumps themselves. There’s also an electrical panel and an opening in the floor for a float, which activates the pumps when the water rises.

The lower two levels are cramped and somewhat dangerous and are considered confined space requiring workers to have special training and certification to enter. This is where the water comes into the pump station. Also found on these levels are the “trash racks” that keep highway debris from reaching the pumps.

Beyond addition to climate change, highway debris, and the limited capacity of the local drainage systems, the aging infrastructure poses the greatest problem. A recent assessment of Metro area pump stations found that the condition of only 22% of the 40- and 50-year-old equipment ranked good. 58% were ranked poor and the balance ranked fair.

The Michigan Department of Transportation (MDOT)’s goal is to bring 90% of the region’s pump houses to a rating of good by 2035, but the $1.5 million cost for each pump house is prohibitive. Therefore, MDOT is undertaking a new plan wherein the majority of pump stations will be replaced by a gravity fed tunnel wherein storm water from highway drains will enter the tunnel and then flow naturally toward the local drainage system. This plan first will be initiated along I-75 within the next couple of years.

The most critical components of a pump station are the electro-mechanical systems. When these fail, water ceases to be expelled from the roadway; the end result being a road closure and/or safety hazard.

On average, a pump has a 25-30 year service life with the electrical components having anywhere from 15-25 years. Service life of these electro-mechanical systems can be extended by preventive maintenance.