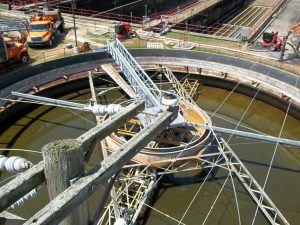 In order to accept and treat the additional flow from the Perry Street Pump Station at the Pontiac Wastewater Treatment Plant (WWTP), several improvements to the Plant are necessary, including a new handling and receiving facility. The Pontiac WWTP Biosolids Handling and Septage Receiving Facility project includes:

The THP system is a newer and innovative process that involves conditioning of the sludge under high heat prior to anaerobic digestion. This process results in a more easily digested sludge and a Class A biosolids.

Rotor Electric of Michigan was awarded the electrical services contract for the project by general contractor Tooles Contracting. The work includes, but is not limited to, installation of:

In addition, the waste gas burner is also to be reconstructed.

The Auburn Wastewater Treatment Plant has a present average daily flow of 6.0 MGD.

The two plants are interconnected, operated, and regulated like a single combined wastewater treatment plant.